Is the Market Shifting?

Over the past few months, there has been an increasing number of listings with price reductions. In April, 27% of Southeast Michigan active listings had at least one price reduction. By August 1st, 35% had reductions. Is this a sign that the market is shifting? 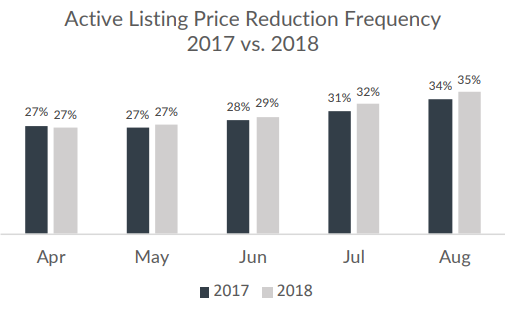 Comparing last year to this year (the dark columns represent price reduced 2017 active listings), we see the same pattern with the frequency of price reductions rising through the summer. The rising numbers are primarily seasonal. As summer progresses, sellers try harder (with price reductions) to land buyers who are looking to be settled before the start of the new school year.

When comparing July closed sales from this year with sales from the previous three years, the Southeast Michigan markets continue to flourish. The number of closed sales was higher than last year and only down 22 2016. Closed volume was higher than any other year and the percentage of listings that required price reductions was tied with last year for the lowest. When comparing price reduction levels between active and closed listings, the closed listings were level around 25% across all price ranges, With active listings, however, there were more reductions in the middle price ranges and fewest among the high-end homes.

Real estate values have been appreciating faster than incomes for the past 7 years. Interest rates are roughly one point higher than they were a year ago. While a 1% shift in interest rate doesn’t sound like much, on a $100k home it increases the payment $58/month. That’s just the interest.

Regardless of price range, by combining the rise in interest plus a 6% increase in average price, the monthly payment of the same home this year will be about 20% more than what it would have been last year. Buyers who have been struggling over the past few years to find quality homes are now faced with eroding affordability.

With affordability expected to continue to decline, both buyers and sellers who are thinking of moving should act sooner rather than waiting. Historically, interest rates in the mid 4% range are still amazingly low. It would be a mistake to assume they will remain this low.
Print Details
Previous post
Next post
The Ultimate Home Seller's Step-By-Step Guide To Preparing For Showings
25 Tips For Moving With Kids Or Pets

Change password
Your password has been successfully reset.
Go to the homepage
Sorry something went wrong
Please try again.
Try again
Already a User? Sign In